NES (Nintendo)
1990
The NES was originally the Famicom, or Family Computer, and it was released in Japan in 1983. There, it sold over 2.5 million units during its first year on the market. Developer Nintendo, a former collectible card company, then decided to expand its interests globally. Executives knew Western markets would be difficult to utilize. The video games industry was in shambles so stores would be hesitant to stock a new console that likely no one would buy. Nintendo planned properly. Firstly, Nintendo agreed to buy back unsold consoles so that stores would not be liable. Secondly, they developed a peripheral known as R.O.B. the Robot that could be used with two of its games (Stack Up and Gyromite both are awful but they served their purpose). With R.O.B, the NES was disguised as an electronic toy, not a video game system. Finally, they redesigned the Famicom and renamed it the Nintendo Entertainment System. The console was released in the United States on October 18, 1985. It was an instant success in no small way due to one of its launch titles: Super Mario Bros.

Game Boy
1990
The Game Boy is an 8-bit handheld video game console developed and manufactured by Nintendo. It was released in Japan on April 21, 1989, in North America in August 1989, and in Europe in 1990. In Southern Asia, it is known as the "Tata Game Boy" It is the first handheld console in the Game Boy line. It was created by Gunpei Yokoi and Nintendo's Research and Development — the same staff who had designed the Game & Watch series as well as several popular games for the NES.

SNES (Super Nintendo)
1998
The Super Nintendo Entertainment System (also known as the Super NES, SNES or Super Nintendo) is a 16-bit video game console that was released in 1990 by Nintendo in Japan, 1991 in North America, 1992 in Europe & Australasia (Oceania), and South America in 1993. In Japan and Southeast Asia, the system is called the Super Famicom, officially adopting the abbreviated name of its predecessor, the Family Computer), or SFC for short.

Game Boy Advance
2004
The Game Boy Advance, often shortened to GBA, is a 32-bit handheld video game console developed, manufactured and marketed by Nintendo. It is the successor to the Game Boy Color. It was released in Japan on March 21, 2001; in North America on June 11, 2001; in Australia and Europe on June 22, 2001; and in the People's Republic of China on June 8, 2004 (excluding Hong Kong).

The viruses are here, and Mario's got the cure! In this tetris clone Mario places colored pills matching them with the viruses on the board. When 3 or more colored pills are adjacent (in any cardinal direction) to a virus of the same color, they're removed from the board. Features both single player, time trial and two player competetive head-to-head action. 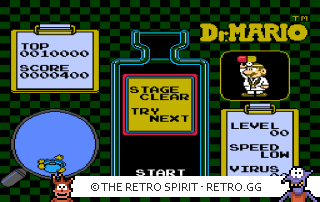 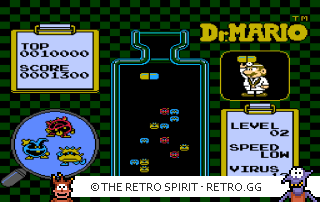 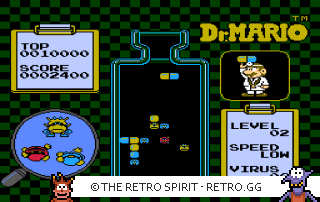 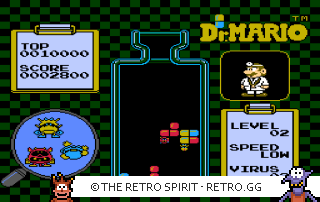 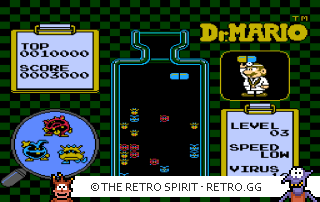 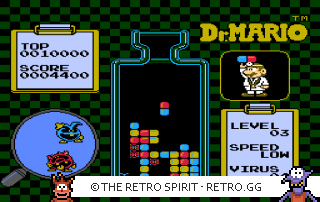 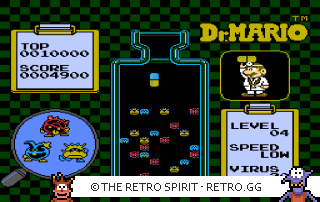 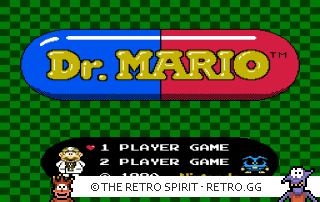 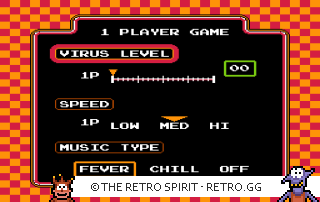 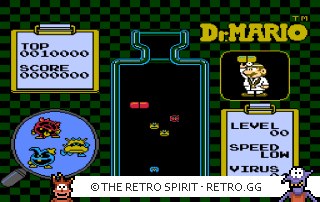 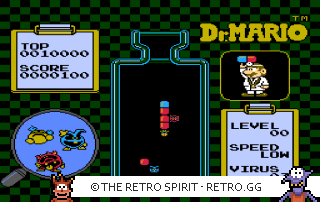 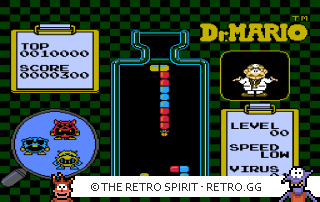 There is currently no review for this game. But, you can help add one! Login to get started.